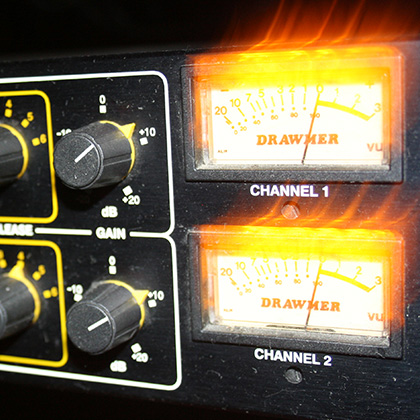 Built to offer audio engineers a variation to the famous Drawmer 1960, the Drawmer 1969 is a dual mono or stereo channel valve preamp/processor. The 1969 was specifically built to appeal to American customers with a cleaner, harder and shinier sound. While loosely based on the 1960, the circuitry of the 1969 has been revised completely throughout the unit.

For starters, not only have the valve stages been altered to add more clarity and warmth, but Drawmer also installed a quieter new microphone amplifier as well. What’s more, the new instrument preamp section has its own dual­triode valve stage as well, which can be used to produce a variety of different overdrive effects.

At the left hand side of the front panel resides the socket and controls for the single Auxiliary Input, which is designed for direct feeds from instruments, especially guitars. The Aux Input presents a 2M(omega) input impedance through the front­panel quarter­inch jack socket. The gain stage imitates a typical guitar amp and integrates passive Bass and Treble controls, a Bright switch and a Low/High level switch which introduces 10dB of gain. A dedicated Gain control allows the dual­triode valve preamp to be overdriven, producing a wide collage of distortions ­­ everything from ‘warm and clean’ to rich ‘soft clipping’. We found this can be good for enhancing the sound of not only electric guitars, but bass, electric piano and certain keyboards. The preamp’s output can be routed to one or both main processing channels.

The microphone preamps integrate Burr­Brown op amps as well as another triode valve stage in the signal path. The switched Gain control ranges between 0dB and 66dB in 6dB steps, while a Source rotary switch selects the signal to be passed through to the compressor. There are four options available: Aux, Line, Mic, and Mic with 48V phantom power. The two following switches allow polarity reversal and high­pass filtering of the selected signal as necessary. The Rev switch has an associated status LED and the Cut switch has three settings: off, and on with a turnover frequency of either 50Hz or 100Hz.

The compressor section uses a JFET as the level controller in order to make it sound a little smoother than a normal integrated VCA. It’s also able to operate a lot faster than an opto­attenuator. The valve amplification stage has also been completely redesigned from the 1960 circuit for a ‘richer and fatter tone’. This new design retains the proven soft­knee characteristic of the 1960, obviating the need for a ratio control ­­ the harder it is driven, the higher the ratio and the stronger the compressive character. Threshold, Attack and Release controls are all present, however: Threshold ranges from ­30dB to infinity (off) while the Attack and Release controls offer considerably more flexibility than the 1960.

In addition to standard dual­mono operation, there are two stereo ­linked modes. The conventional offering shares control voltages between the two channels and the controls of channel 1 determine the settings for channel 2 in the usual way, but only for Threshold, Attack and Release controls. However, there is no linking facility for the output Gain control when working in stereo.

The second stereo option is a new ‘Big’ mode, which introduces a gentle roll­off below 100Hz in the compressor side­chain, desensitizing the system to low frequencies. This is designed to reduce the tendency for bass ­heavy material to dominate the compression of the main signal, producing pumping. For the external EQ die­hards, the 1969 retains proper side­chain access sockets on the rear panel.

Here at Studio 11, we primarily use the Drawmer 1969 to amplify direct guitar and bass signals into Pro Tools. We found it quite easy to secure a broad range of tones for many different styles of music, even out of just one guitar. Another great use for the 1969 is applying it to the master bus of your mix using the ‘Big’ mode. This feature is great for smoothing out and adding extra bump to dance based music such as hip hop, house, trap and EDM. Its almost kind of like tape compression.