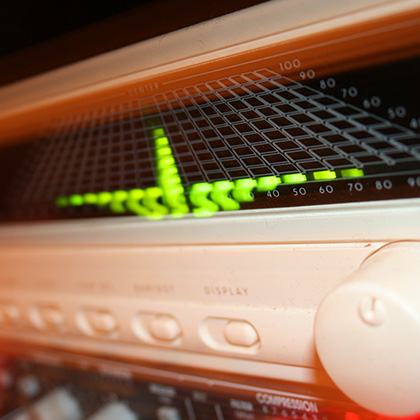 The Hughes AK-100 Sound Retrieval System (SRS) was first developed in the early 80’s by Arnold Klayman to create an immersive 3D sound field using only two speakers by using the process known as ‘head-related transfer functions’. This process creates a more spacious ambience within the stereo field, producing strong special cues for different instruments in an audio mix.

Now, unlike several other stereo enhancers, the AK-100 does not have time delay processing, its Sound Retrieval System is single-ended, requiring no prior encoding of program sources. It employs no artificial reverberation, and neither does it use harmonic generation or artificial phase correction alteration.

SRS is based on certain principles of human hearing that have been explored by Hughes researchers and others over the years. In a stereo system, normally the sum signals (L+R) contain all of the direct and centrally positioned sounds; the difference signals (L-R and R-L) provide spatial information and directional cues to the human hearing system. The Hughes system addresses the fact that the transfer function of human hearing is not constant. For example, sounds coming from straight ahead have a different transfer function, or frequency characteristics, than sounds coming from the sides or from the rear. Aside from the other aural cues, such as time of arrival and relative sound intensity at each ear (once thought to be the only elements involved in stereo perception), we use this transfer function to zero in on the directions from which sounds emanate. SRS takes into account the varying transfer function of human ears and hearing in a continuous and dynamic manner. It processes the difference and sum components so that the resulting signals correspond with the spectral registration of human hearing. To put it simply, we are tricked into believing that sounds are coming from locations other than the two loudspeakers in front of us.

The AK-100 hooks into any system via the usual in/out loop used for tape decks, equalizers, or mixers. If the only tape loop is already being used, it can be reconnected via the in/out loop on the AK-100 itself. If you have a separate equalizer in your system, it is recommended that it be placed in the signal path after the AK-100.

The AK-100 is about the size of a typical preamplifier, but that’s where the resemblance ends. A push button at the left end of the front panel turns on power. An SRS in/out switch comes next, and a green light nearby confirms when SRS is active. A push button bearing the label ‘Rev Trim’ (reverberation trim) is next, allowing you to subtly reduce the amount of reverberation around a singer’s voice. Pushing this switch will also decrease the amount of ambient information during quiet passages in music or in film soundtracks. The’3-D Mono’ switch next to the right allows you to achieve a surround type atmosphere when the input signal is mono. The AK-100 may reproduce low frequency rumbling. For this reason, it incorporates a ‘Filter’ circuit that, when activated, attempts to correct the problem with only minimal processing.

Perhaps the most important controls are the pair of rotary knobs near the right side of the front panel, ‘Space’ and ‘Center’. The ‘Space’ control allows you to adjust the amount of SRS ambience information (L-R and R-L) in the audio output. Turning the ‘Space’ control clockwise widens the apparent soundstage. The “Center” control adjusts the amount of L+R information in the output. If a center vocalist seems to be too far in the background relative to orchestral accompaniments, you would increase the setting of the ‘Center’ control and reduce the setting of the ‘Space’ control. Each control has a center detente, which I found was a good place to begin when setting up the AK-100 for any kind of musical program. The rightmost rotary knob is a ‘Level’ control for adjusting output level.

Overall, we at Studio 11 found that really nothing else compares to the AK-100 for stereo enhancement. It sounds amazing running mono instruments through it such as acoustic guitars, horns, strings, or even vocals. It also sounds amazing running whole mixes through it, subsequently making a mix sound bigger. If you are looking for that massive stereo sound, and are finding that your plug ins just are doing the trick, hit us up. In audio mastering we can turn your mono world into stereo one with no side effects.

DO YOU WANT THE SOUND OF THE HUGHES AK-100 ON ONE OF YOUR INDIVIDUAL TRACKS?

OR FOR MASTERING YOUR ALBUM TRY OUR ONLINE MASTERING SERVICES