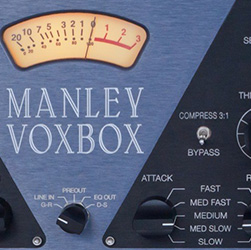 The Manley Voxbox is an all in one channel strip designed primarily for use with vocals. In terms of characteristics, the Voxbox has XLR connections in the back and has a ¼ inch input in the front in the mic pre section. All signal paths use only valve amplification, and circuits have been carefully designed for optimal signal integrity, combining elements from previous designs but taking them further. The four main sections are mic preamp, compressor, EQ and de-esser. The extremely thick, front panel includes the power switch, accompanied by a Ready L.E.D. that turns on after about 20 seconds when the protection circuitry has done its stuff.

The input section features a locking toggle switch for phantom power, switchable 80Hz and 120Hz bass roll-off, and a phase flip. A front panel instrument jack overrides the rear line input. There is an input pot, and a gain control has five positions (40dB to 50dB). Manley points out that this is not a pad, but controls the amount of negative feedback. At lower settings the sound is more clean and transistor-like. At higher settings a warmer, more ‘valvey’ characteristic is in evidence.

The compressor is highly unusual in that it occurs in the signal path before the mic preamplifier. It has parameters for threshold, attack, release, and a switch to either bypass or to compress at a 3:1 ratio. The attack and release controls each have five positions, and four pairs of time constants provide a high degree of control. Certain settings emulate LA-2A and LA-3A, and the overall character of the unit is smooth and gentle.

The passive EQ section includes three bands, each with 11 switchable frequencies. However, the High and Low sections are (bell-curve) boost only, and the Mid is cut only, each up to 10dB. There are no ICs, transistors or valves in the EQ section; although a tube circuit follows to makeup gain lost in the EQ and De-Esser sections.

The EQ section is pretty basic, consisting of three bands, each with 11 switchable frequencies. However, the High and Low sections are (bell-curve) boost only, and the Mid is cut only, each up to 10dB. Lastly, the de-esser provides four frequencies which control a sliding filter and a threshold pot that controls another opto-isolator. A fifth setting provides a 10:1 limiter, which is not a perfect brick- wall limiter but rather pleasantly squashes the signal with its opto circuit.

Like most of the gear made by Manley, the Voxbox sounds incredible. The mic pre and compressor are probably the most impressive sections of the unit as far as recording vocals goes, but the EQ and de-esser are no less important and sound great too. This is a versatile enough piece of outboard gear that it can be used for just about any type of voice. Beyond vocals, you can definitely extend the use of this to other applications as well, making it the perfect all in one channel strip for recordings of all types.